The new house for the older boys was completed in only 2½ months. To the delight of the young people and all the residents of Akany Avotra, the house was inaugurated with a festive mass on 5th December. Now only the furnishing is missing - donations for this are very welcome.

Thank you, dear Ulrich and Evelin, for this legacy.

"Kéré": Famine in the south of Madagascar

Madagascar is one of the five poorest countries in the world. Everywhere on the island the majority of people live under difficult conditions. The extreme south is in a particularly critical situation, not only because of the coronavirus, which has caused many people to lose their jobs, but above all because of the drought which has been a major problem for years. The people in this region have always suffered from food shortages, which have been dramatically exacerbated in recent years by climate change. For the past two years, there has been no rainy season in this southern part of Madagascar, and food crops have become scarce, while cattle, goats and poultry are starving. People in the bushlands eat botagne (ash and tamarind) to satisfy their hunger.

Children in particular are in a state of malnutrition. A government nutrition programme was suspended in June. Now in October, the number of children aged 6 to 59 months suffering from acute malnutrition is estimated at 14,332.

Faced with this famine, the Vincentian Family in the region could not remain indifferent. Father Alexander, Provincial of the Lazarists, decided not to leave the use of the donations received to the Lazarists alone, but to entrust it to a Vincentian Family commission (Lazarist Fathers, diocesan priests, Vincentian sisters, AIC, AMM, Vincentian Conferences, Christian volunteers, including protestants), because he knew that unity means strength. The role of this Commission is to plan a strategy to combat the famine more effectively. Depending on the donations received, destinations will be selected and consideration will be given to what aid can be provided and how the various donations (food, water, money, seeds, etc.) can be delivered to the people affected.

A small team of three priests and three Daughters of Charity has also been formed to organise aid at local level. Their task is, among other activities, to mobilize the members of the Vincentian Family to go door to door in the affected parishes to analyse the situation in each household.

"Thanks to the efforts of the local Vincentian Family, we have been able to obtain information on each site very quickly. We were informed of the number of victims and the number of families affected. And each location has already told us how the local team could start helping, for example how many kilos of rice per family or per person are needed. So, we decided to buy 53 tons of white rice in bags of 50 kilos. Instead of giving money to the individual families to buy water, it was suggested that we rent a water tank truck. So far everything is going well", reports Father Pierrot Martin Rakotoarison, CM.

But he also writes: "According to what we have learned, this will not be enough, despite the amount of rice already distributed. We need more, because this famine could well last until January 2021".

To support the work of the Vincentian Family in Madagascar to fight this famine, you can make a donation to the following account:

NB: The reports and photos of the famine in the south of Madagascar are from the regional coordinator of the ONN (National Nutrition Office) in Androy and from Father Pierrot Martin Rakotoarison, CM, from Fort Dauphin.

10 YEARS OF THE TSIRY PROJECT: REVIEW AND OUTLOOK

When the Tsiry project started in autumn 2010 with the training of the teachers, nobody had any idea how long-term, successful, and sustainable the programme would be. By the summer of 2020, 5173 adults and 2180 children, including 1283 girls, had participated in 11 locations for adults (AFID), and 7 locations for children (ASAMA).See more

NEWS FROM THE ORPHANAGE 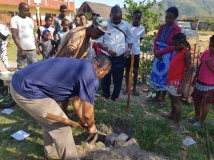 For a long time there had been plans to build a small house for the older boys on the grounds of the children's home. A modest wooden hut was only an interim solution. Now a generous donation from Germany has made the new building possible and the foundations have been laid. Soon the older boys, who are all still in school, will have their own space where they can learn undisturbed. They will also be responsible for keeping it clean and tidy. They will continue to be looked after by the director of the children's home - and the little boys will have more space and peace to play and learn. 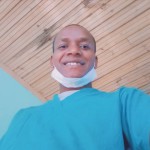 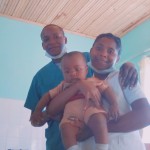 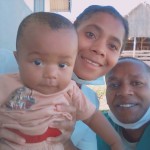 Many years ago, a little boy came to AIC-Manakara and asked for a shirt because he wanted to go to school. His mother had died, he was taking care of his sick father who had no work. Not only did he get the shirt, but also school fees and lunch. Hard working, intelligent, and determined, he managed to get a very good high school diploma, while caring for his father the whole time. Maybe that is why he wanted to study medicine so urgently - a dream that became reality with a scholarship from the "Friends of AIC-Madagascar".

Now Olivier is a doctor in an Italian hospital in a remote area in the south of Madagascar, where he is urgently needed. He is married to a nurse and has a young son.

Olivier is not the only one who has made it, but many other talented young people are waiting for this chance. You can help them with a scholarship - for more information, please contact AIC-Madagascar. 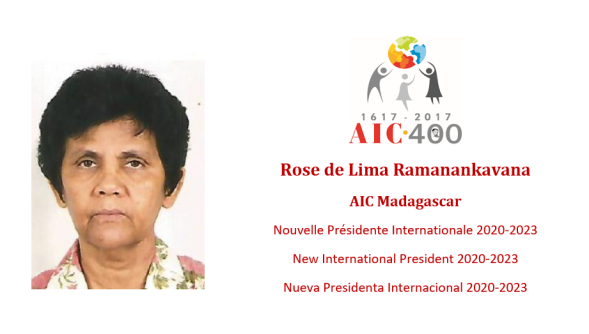 In March 2020, Rose de Lima Ramanankavana, who helped found AIC-Madagascar in 1988, was elected President of AIC-International, a network of 100,000 volunteers in 55 countries. Rose has many years of experience at international level in various roles and this achievement recognizes her leadership qualities, as well as all her hard work serving the most disadvantaged people, in Madagascar, Africa and beyond.

Nirisoa Hasindaza Rakotovao, another Madagascan volunteer, was also elected to the International Executive Board and has been nominated Continental Coordinator for Africa.

Congratulations to Rose and Nirisoa for all their hard work at such a difficult time. 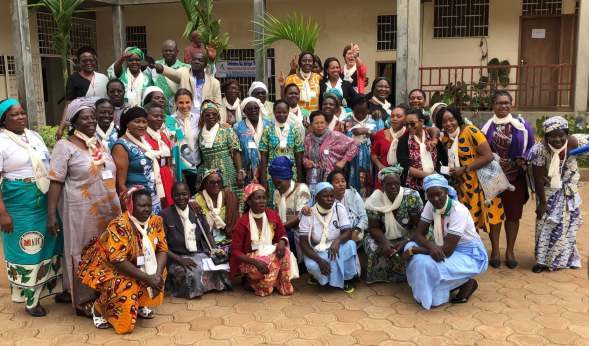 Three volunteers from AIC-Africa joined around 50 AIC volunteers from 9 different African Associations in Yaoundé, Cameroon, from 23rd-26th August for the AIC Africa continental training seminar on the theme “Women of Africa: For Responsibility and Service in Leadership”. It was an opportunity to continue to learn, exchange experiences and strengthen the links and friendships between AIC volunteers from this continent.

Anne Bemmo, AIC Coordinator for Africa, and Agnès Dandois, Treasurer of AIC Solidarité, recently visited AIC-Madagascar to discover the association’s activities. In a country suffering from a lack of infrastructure and a difficult climate, the volunteers do all they can to fight against poverty and strengthen the level of education of the population.

AIC-Madagascar was founded in 1988 in Manakara by 4 volunteers. Today there are 150 volunteers organized in 12 local groups. Acting in response to the problems encountered at local level, AIC-Madagascar’s activities are centred on education and nutrition.

For children, the volunteers provide educational support to get them back into the school system, school support, canteens and assistance with obtaining birth certificates in order to be registered at schools. The volunteers also offer support to mothers and help them set up income-generating activities.

During their visit to groups in Antananarivo, Manakara, Vohipeno, Farafangana and Fianaransoa, Anne and Agnès were able to appreciate the strong links between the volunteers and the community spirit among the beneficiaries, despite contexts of severe poverty.  The volunteers try to involve the beneficiaries in their projects as much as possible to promote their autonomy.

Anne and Agnès also noticed the association’s ability to find local partners and funding to ensure that projects can continue in the long-term (notably with ASMAE).

Life in Madagascar is not easy, but every day, the local actions of the AIC volunteers help transform the lives of hundreds of Malagasy people for the better.

Click for more information about AIC-Madagascar’s projects, such as the extensive TSIRY literacy project, the canteen project in Fianarantsoa, and the sustainable development project in Manakara-Vohipeno, or to make a donation.

Did you know? With just 3€, you can provide a child in Madagascar with a healthy and nutritious meal every day for a month. Thank you for supporting AIC-Madgascar.

AIC-MADAGASCAR: EMPOWERMENT THROUGH EDUCATION - A YOUNG GIRL RECEIVES HER DIPLOMA

A Malagasy orphan, formerly welcomed at an AIC centre, has received the highest honors for her Master thesis. A wonderful example of resilience and empowerment through education!

In 1989, the young Georgina was an orphan and her future wasn’t looking bright. But that year, her life changed when the AIC volunteers welcomed her at the Saint Louise Centre in Manakara, Madagascar. At this Centre, Georgina had the opportunity, like many other children living in difficult situations, to receive meals and academic support.

Indeed, the AIC volunteers are convinced that educating a child promotes change in their community.

And Georgina has just proved beyond all doubt that they are right. This year she presented her dissertation, in French, on the theme of early pregnancy. She succeeded brilliantly and made her ‘adopted mothers’, the AIC volunteers, very proud. From now on, as midwife, she will contribute to the development of her community through her skills.

Our deepest gratitude goes to the ‘Friends of Madagascar’ in Germany who have been supporting this fantastic project with generosity for many years.

AIC-MADAGASCAR: PROMOTING THE BASIC RIGHTS TO EDUCATION, A DECENT DIET AND AN IDENTITY

The volunteers from AIC-Madagascar support primarily children who are not in school and their mothers.  They set up preschool centres, organise educational support to get children back into state school and provide a daily meal at the centres’ canteens.  They also offer scholarships to young students to allow them to access higher education.  Another service made available is the official registration of births.  The mothers meet every week and receive professional training on agriculture, rearing animals and manual work.  Workshops and meetings promote empowerment and better financial independence.

In the most remote regions of the south-east of the country, the volunteers have developed the TSIRY project, an extensive literacy project for children who are out of school and adults, mostly women.  The project is run in close collaboration with the local community.

The volunteers are convinced that educating children and training women leads to changes in the community.

All their activities are made possible thanks to funding received from donors, private foundations and other AIC associations through twinnings. More information about this project. 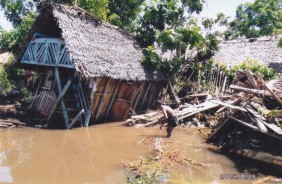 Even though Cyclone Chedza caused vast devastation in Madagascar, especially in the capital and in the South-East there was no international news, no headlines. For days remote areas were not accessible, streets were blocked, bridges destroyed. Now it is certain that more than 70 people lost their lives, and more than 200,000 lost their homes. In addition the strong rain following the cyclone caused landslides, blocked streets and killed another 17 people in the Ikongo region.

Among other places where AIC volunteers work, Manakara was hit hard by Chedza, destroying the small houses AIC had built for single mothers and homeless young people. Since outside aid was delayed in arriving and was insufficient, AIC volunteers tried to help as much as possible. They offered meals to those who had lost everything and to those who could not afford to buy rice following the subsequent price rises. School materials, clothes and the furniture also had to be replaced and the volunteers started rebuilding the small houses.

We can help the AIC volunteers in Madagascar, who have also suffered from the flooding themselves – all donations for the victims of Chedza are welcome!