Once again, Madagascar has been hit by a natural disaster that has received little media coverage. This time, the Batsirai Cyclone traced a path of devastation from the south-eastern coast across the southern highlands to the coast of Mozambique, devastating mainly the towns of Mananjary, Manakara (the town in which lives the AIC President), Farafangana, Fort Dauphin and Fianarantsoa in particular, as well as countless villages, causing at least 20 deaths and a large number of injuries. Two weeks earlier, Cyclone Ana had already caused floods and landslides in the capital Antananarivo, killing about 50 people. Now, too, it is mainly the less well built houses of the most disadvantaged people that have been destroyed, but also schools and churches. Since most of the AIC groups and also the ‘Akany Avotra’ children’s home are located in the affected region, AIC volunteers, although suffering from the devastation themselves, can provide direct aid that will reach its destination immediately. On the other hand, government aid – initially drinking water and food – is only slowly getting underway. It will take time for water pipes and electricity to be restored, which is also making communication difficult. We have not heard from the Akany Avotra children’s home yet, but the south was a little less affected and it is a well-constructed house.

In the aftermath of the Batsirai Cyclone, which devastated the island of Madagascar on February 5th-6th, the volunteers of AIC Manakara have started distributing food to victims. We have visited the affected families and found that 36 of the small houses built by AIC are no longer habitable. We want to rebuild them as soon as possible with the help of our partners, AIC USA and the Friends of AIC Madagascar.

In Fort Dauphin, the ‘Akany Avotra’ children's home has been spared, while the devastation in Fianarantsoa is considerable and has not been assessed yet. We are expecting news from AIC groups in Farafangana and the surrounding villages, which we have not been able to reach yet.

The State Disaster Management Agency has estimated the death toll from Cyclone Batsirai at 120. According to the agency, the homes of just over 124,000 people have been damaged or destroyed, and another 30,000 people have been left homeless and are living in temporary shelters and tents.

Batsirai was the second destructive storm to hit Madagascar in a fortnight, after Tropical Storm Ana killed 55 people and displaced 130,000, and the cyclone season is not over yet.

big thank you to AIC volunteers in Madagascar, who are mobilizing to support people affected by a large fire in the city of Farafangana this past October 2021. Since the fire left nearly 3800 people without a home, volunteers have been providing them with food and clothing, and have set up temporary housing from metal sheets.

Famine in the South of Madagascar

The famine in the south of Madagascar, caused by climate change and hardly noticed in the rest of the world, claims victims among children and old people. It forces farmers to sell their land after the seeds have been eaten and many animals have died from thirst. Those who hope to find work there move to the north, the weaker ones take refuge with the Daughters of Charity, camp on the grounds of the monasteries and are at least provided with the necessities. Parentless children are taken to the AIC orphanage. Now, after some young people have left Akany Avotra for training or studies, more than 60 children, some of them younger, live there again.  For this and because of the increased rice prices we want to raise the monthly financial contribution and hope for the support of our donors.

In times of Corona 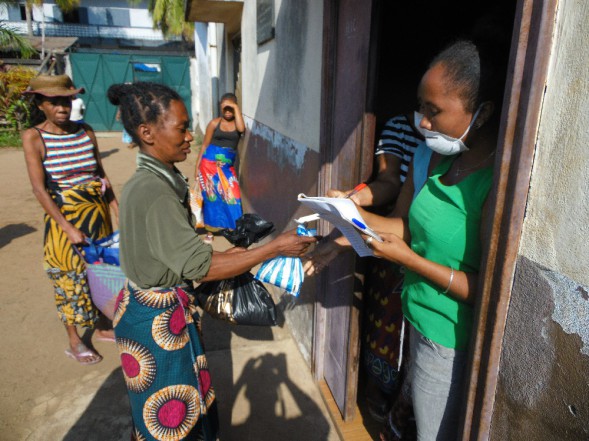 In times of Corona, when school meals are no longer available and people without a steady job have no income, AIC distributes soap and food to needy families.

We are very happy that just before Christmas it was possible to financially support not only the reopened school kitchens, but also many poor families, especially single mothers and their children.
For this we thank all donors and wish them a blessed, peaceful Christmas and a hopeful start into the new year.

The AC Madagascar - the volunteers and the beneficiaries